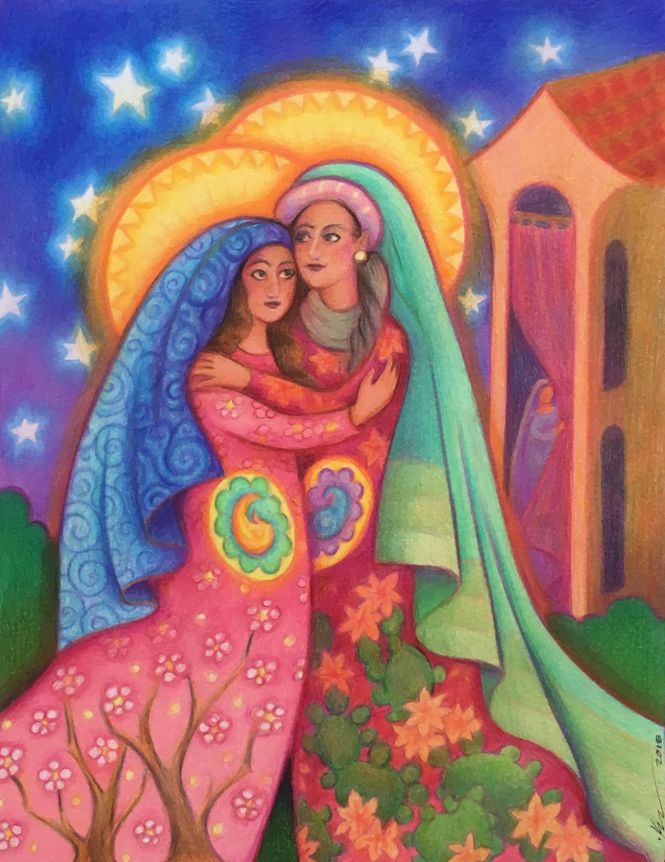 This modern interpretation of the beloved Christian icon “The Visitation” illustrates the biblical story of two significant women at a critical time in their lives. St Mary, pregnant with Jesus, and her aunt, St Elizabeth, pregnant with St John the Baptist, greet each other and affirm God’s outrageously good care for the vulnerable. (Gospel of St Luke, Chapter 1, Verses 39-56).

Stylistically, my drawings are influenced by sacred Hindu art, Persian miniatures, and fantasy artwork for children’s books, all of which blend bold colors and soft edges. Visually, such graphics inspire a feeling of enchantment and wild possibility – a quality I wish to bring to the rendering of classic Christian images.

This new artwork maintains much of the visual vocabulary of the classic icon — Mary is much younger and to the left of Elizabeth who is older. They are depicted talking or embracing in an outdoors landscape often with buildings behind them. Sometimes, there is a building on the right with a large open door where a person stands.

I have chosen to change some elements such as setting the scene at night (which I’ve never seen before.) I placed these hopeful, faithful women under a very starry sky to speak to us about hope in dark times. The building on the right is quite like older icons with a single person pulling back a drape.  I’m not sure of the traditional meaning, though it speaks to me of institutions which are dark on the inside possibly being exposed to light. In this image, the woman pulling back the curtain is “Sophia/Chokhmah” a personification of Holy Wisdom.

Mary’s dress is pink – a color chosen to align with contemporary, youthful Feminist movements. It is decorated with blooming trees inspired by the Hebrew prophet Isaiah: “A shoot shall come out from the stump of Jesse, and a branch shall grow out of his roots.” (Isaiah 11:1 NRSV). Jesse is the father of King David, the great Jewish leader. The anticipated messiah was expected to come from his royal lineage. The child Mary is carrying is the new branch on the old family tree stock. I began drawing these trees on December 7th – the anniversary of the day Pearl Harbor was bombed. Thoughts of Japanese-Americans, for whom this day remains traumatic, came to mind. In their honor, I designed trees which are a hybrid of the beloved Sakura (cherry tree) and stone fruit trees (peach and almond) from California’s Central Valley where many Japanese settled to work on orchards, and still do.

Mary’s veil is blue and decorated with swirls of water symbolizing the Jordan River – the line of demarcation between The Wilderness and The Promised Land. This is where St John began a new spiritual movement baptizing people to prepare them for the Messiah. Mary’s veil is short, as the Christian movement is newer than its parent religion – Judaism.

Elizabeth’s dress is a darker plum-red color reflecting her maturity. It is decorated with blooming cacti, also inspired by the Hebrew prophet Isaiah: “The wilderness and the dry land shall be glad, the desert shall rejoice and blossom; like the crocus.” (Isaiah 35:1 NRSV). Refugees traveling up from Guatemala and Honduras to the United States were in my heart as I drew this “blooming dessert.” It was completed the day the death of Jakelin Amei Rosmery Caal Maquin, a seven-year-old Guatemalan girl who died in US Custody was announced, days after the Feast Day for La Virgin de Guadalupe, an indigenous manifestation of St Mary in the Mexico highlands.

Elizabeth’s veil is much longer and more elaborate, appropriate for the Jewish faith. Elizabeth is the descendant of the first religious leaders – Moses, Aaron, and Miriam — of the freed Hebrew slaves who left Egypt. These divine ancestors are honored by the three decorative bands on Elizabeth’s veil. The color of the veil is a nod to the ocean — not so much a specific body of water, but the ocean as the source of all life.

The images of Mary’s and Elizabeth’s foetus represent their sons as persons and their on-going ministries. John is represented by a blue, watery “comma” – the call to water baptism and spiritual cleansing. Jesus is rendered as a yellow-orange fiery “comma” – the work of the Holy Spirit manifesting in the created realm inspiring hope, compassion, justice, and mercy.

The persons of Mary and Elizabeth are meant to be Middle Eastern, a more realistic portrait of Jesus’ family, and a reminder that faith and race keep intersecting and impacting each other. As I drew these women I thought of amazing women of color that I know who are courageously breaking new ground with their compassionate leadership which addresses critical problems.

This specific icon “The Visitation” and its holy text origin have long inspired me. Recently I spoke about this sacred moment when these two women, pregnant with God’s Dream, celebrate God’s goodness and call us forward with hope. If you’d like to hear that message – visit: https://soundcloud.com/owedia/seeing-in-the-dark-be-friend)

We will be offering this image in card and poster form later in 2019. To be notified, please email: inthebiglove@gmail.com.

Dec 7th no office session/online on FB “In the Big Love”  Free.

If you’re in need of a little extra care treat yourself to this wonderful package deal, or secure a session for someone you love. Openings are quite limited. Please call or email to schedule an appointment: 510-921-6905 or inthebiglove@gmail.com.